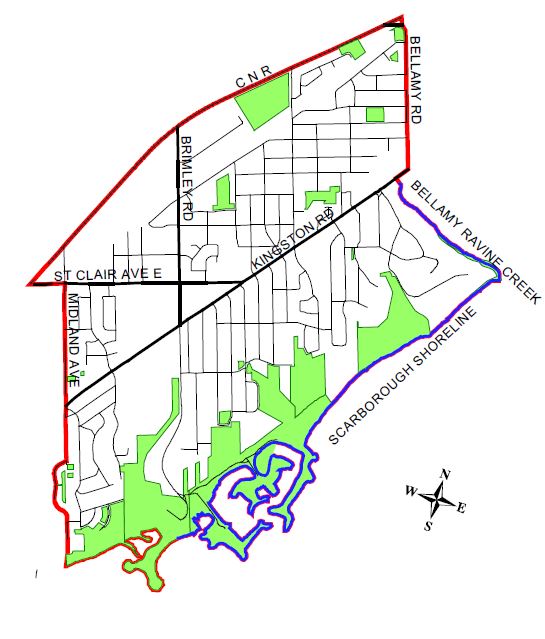 Cliffcrest is a neighborhood in the city of Toronto, Ontario, Canada, located in the district of Scarborough. The neighborhood runs along Lake Ontario to the south and is bordered by Midland Ave. to the west, the Canadian National Railway to the north, and Bellamy Rd. to the east. There is a large Irish population

Kingston Road divides this leafy Scarborough neighbourhood. The central artery offers just about every big-box store one could need, plus loads of unique ethnic restaurants. To the north, apartment buildings and subsidized housing keep the population mixed. To the south, Lake Ontario access and winding streets create a more exclusive area, where older homeowners are investing in eye-catching renovations.

Original 1950s and ’60s bungalows have been demolished for their large lots and new two-storey monster homes are being built. There are some well-regarded high schools here, like R. H. King Academy (one of the few public schools with a uniforms policy) and Cardinal Newman Catholic High School.

Loads of green space creeps up from the lake—a walking path winds through Bellamy Ravine at the area’s eastern end, while Bluffer’s Park to the west has a public marina, a small sandy beach and two private yacht clubs. Cyclists and hikers with good lung capacity can take advantage of the hilly Scarborough Bluffs section of the citywide Waterfront Trail.

Real Estate in the Cliffcrest