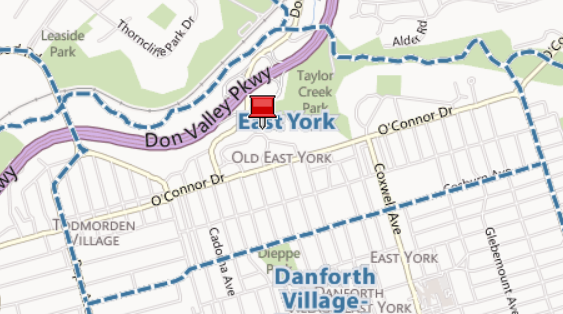 East York is a former municipality within the current city of Toronto, Ontario, Canada. It was a semi-autonomous borough within the overall municipality of Metropolitan Toronto before East York, North York, York, Scarborough, Etobicoke and Toronto were amalgamated into the new "megacity" of Toronto in 1998. One of East York's claims to fame was that, before the amalgamation, it was Canada's only borough.

It is separated by the Don River from the former City of Toronto. Traditional East York is southeast of the river, and the neighbourhoods of Leaside, Bennington Heights and densely-populated Thorncliffe Park are northwest of the river. The heart of East York is filled with middle-class and working-class homes, with extensive high-rise developments along peripheral major streets and in Crescent Town and Thorncliffe Park

East York was originally part of York Township. Following the incorporation of the Township of North York in 1922, York Township was divided by Toronto, Leaside and North Toronto. With the rapid growth that followed the opening of the Bloor-Danforth (Prince Edward) Viaduct in 1919, the residents of the eastern half of York Township felt they had been neglected by the township when it came to roads, sewers and other municipal services. Left with the option to either join the City of Toronto or branch out on its own, 448 East Yorkers voted to incorporate a new township, while 102 voted to amalgamate with Toronto. The Township of East York was incorporated on January 1, 1924 with a population of 19,849. The western half of York Township retained its name.

East York was originally populated by working class English people who valued the opportunity to own small homes of their own, with front lawns and back gardens. Many had immigrated from Lancashire and Yorkshire. In 1961, 71.7% of the population identified themselves as having British origins.

In the late 1940s, after World War II, East York became home to many returning veterans and their families. Many inexpensive homes were built, including the houses around Topham Park, by the government, to house the returning veterans and the baby boomers. The local government was both socially conscious and frugal, fitting the residents' self-image of East York as filled with supportive neighbours and non-government organizations.

For many years, the borough did not allow the serving of alcoholic beverages in any restaurants, etc. The result was a heavy concentration of alcohol-serving restaurants and bars on Danforth Avenue, a main street in the city of Toronto running east-west just south of East York. The prohibition of serving alcohol was eliminated in the 1970s.

The borough of East York was established in 1967 through the amalgamation of the former township of East York and the former town of Leaside. Leaside was a planned industrial and residential community. East York has over the years been a residential enclave for senior citizens, as the original owners from the 1940s age and as younger families move out to suburbs to live in larger houses. East York had its own fire department with three stations, which are still in operation today, but amalgamation merged them into the new, combined Toronto Fire Services

Recently, rapid and accelerated gentrification has changed many neighbourhoods. Many one-story bungalows have added second floors, and many shops have been converted to more upscale shops.

East York's last mayor was Michael Prue who went on to become city councillor for East York, and then a Member of Provincial Parliament for Beaches—East York in 2001. Between 2002 and 2005, the East York Civic Centre's "True Davidson Council Chamber" was used to hold the Toronto Computer Leasing Inquiry/Toronto External Contracts Inquiry.

List of the reeves and mayors of East York

Since the 1970s, the population composition has changed from predominantly British, as East York has become a major arrival point for immigrants, many of whom have established their first Canadian residence in the apartments that became plentiful in Thorncliffe Park, Crescent Town and elsewhere on or near main streets. Almost half of the population in 2001 (45.1%) was foreign-born, and of these, 49.0% had immigrated to the area between 1991 and 2001. These groups include Bengalis, Indians, Pakistanis, Jamaicans, Filipinos and Sri Lankans. East York also has a well established Greek population and a growing Chinese community. In 2006 the percentage of visible minorities was 38.4%, and the percentage of immigrants was 44.4%.

The religious affiliations of the East York population are consistent with its ethnic composition. Some 63.4% of the population adheres to Christianity, with an almost even split between Catholics (23.6%) and Protestants (25.3%). Christian Orthodox and unspecified types of Christianity make up 12.0% and 2.5% respectively. The largest non-Christian religious group is Muslim, who make up 12.6% of religious adherents, followed by Hinduism (3.7%), Buddhism (1.6%), and Judaism (0.9%). A sizable percentage of the population (17.1%) has no religious affiliation.

There is also Estonian House which is the unofficial Estonian Consulate in Toronto. The building houses a banquets, social events, and even a Estonian school for the Estonian community of Toronto.

While English is the dominant language in the area, nearly half (42.6%) of the population reports that their first language was neither English nor French

East York has been the home of:

This area really got going in 1946, as a neighbourhood of returning war veterans and their growing families. Nowadays, young professionals are replacing the retirees. The well-maintained, orderly streets south of O’Connor are lined with rows of brick bungalows, and almost every house has a good-size lawn and driveway. Two-bedroom bungalows start at $375,000, while houses north of O’Connor go from $500,000 up to the million-dollar mark. Local shopping and restaurants are lacking, but small strips on Coxwell and Donlands provide basic amenities, including an LCBO. Squeezed between O’Connor and Taylor Creek is the older Todmorden Village: the houses and lots here (many of which back on to the ravine) are bigger, but so are the prices.

HOUSING STOCK: The majority of houses are small, post-war bungalows, but builders have been busy: many of those have been topped up with second stories, or remade into larger stucco and stone numbers. East of Donlands, there is more of a hodgepodge of styles and sizes.

THE VERDICT: The placid side streets feel nicely removed from the hustle of downtown, though residents are at the mercy of the city’s bus system. The trade-offs are a bigger backyard and smaller mortgage. Watch for prices to rise as the secret about Old East York gets out.

Fresh From the Farm The meat and dairy here come directly from Mennonite or Amish farms outside the city. 350 Donlands Ave., 416-422-3276

Taylor Creek Drop out of the city and into this ravine for a bike path connected to the Don Valley. Entrance at the east end of Cosburn Avenue.

Nearby Shopping and Services

Fresh From the Farm It all started 13 years ago with owners Tim and Jacqui Schmucker supplying fresh meats ...