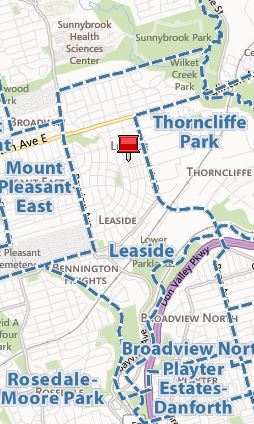 Leaside is a neighbourhood in Toronto, Ontario, Canada. The area takes its name from William Lea and the Lea family, who settled there in the early years of the nineteenth century. The area first developed as farmland along with Toronto through the nineteenth century. It was incorporated as a town in 1913. In 1967 it was amalgamated with the township of East York to form the borough of East York. In 1998 it became part of the city of Toronto.

The commercial strip of Bayview from Millwood to Soudan is reason enough to move here. With a comfortable mix of chains and indie shops, this up-market (but not too pricey) bit of high street is the heart of Leaside-Bennington—and all of eastern uptown, for that matter. A relatively new development, Leaside residents numbered just 43 in 1913; in 1929, there were still fewer than 500. Nonetheless, the neighbourhood once had its own train station and an airfield (used for wartime pilot training and the site of Canada’s first delivery of Airmail in 1918). Munitions factories, the Durant Motor Company and Canada Wire and Cable all came and went over the years, mostly between the wars, and each built houses for its workers and executives. Leaside High School (Margaret Atwood’s alma mater) is generally considered one of the better schools in the city. It’s believed that The Handmaid’s Tale is based on the school.

Hollywood Gelato
Though lineups might deter newbies, the natural ingredients that go into this gelato draw aficionados from far and wide. 1640 Bayview Ave., 416-544-9829.

Pâtisserie la Cigogne
This small but exquisite shop is a francophilic oasis of butter, cream and flakiness. 1626 Bayview, 416-487-1234.