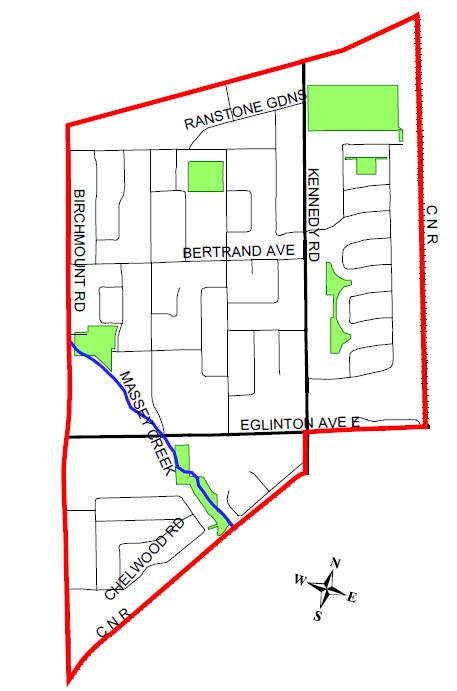 Ionview is a neighbourhood in Toronto, Ontario, in the district of Scarborough. It is bounded by Birchmount Road to the west, the hydro transmission corridor north of Ranstone Gardens to the north, the CNR railway to the east, and Eglinton Avenue East, Kennedy Road and the CNR railway to the south. Portions of the area comprising modern Ionview were once contained in the former village of Wexford, founded in the 1840s, and Scarborough Junction, established in 1873. The area remained generally rural until the postwar housing boom of the 1940s and 1950s.

The Taylor-Massey Creek, an eastern tributary of the Don River, flows through the Eglinton Ravine in the southwest portion of Ionview. Green space within the neighbourhood includes Eglinton Ravine Park, extending from Eglinton Avenue East to the railway, centrally located Ionview Park, and Jack Goodlad Community Park in the north.

Ionview is a predominately working-class neighbourhood, with 63% of the population residing in rented accommodation as of 2001, the majority in apartment towers. There was a higher percentage of children aged 0–4 in Ionview than the Toronto average as of 2001.

The neighbourhood is well-connected to the rest of the city by public transit, served by the TTC's 17 Birchmount, 34 Eglinton East, and 43 Kennedy bus routes. Kennedy station, the eastern terminus of the Bloor-Danforth subway and southern terminus of the Scarborough RT, is immediately south of Ionview.

Ionview is contained within the federal and provincial riding of Scarborough Southwest. It is represented by Lorenzo Berardinetti in the Ontario Legislature and Dan Harris in the Parliament of Canada. The Toronto Police Service's 41 Division is based in the neighbourhood.