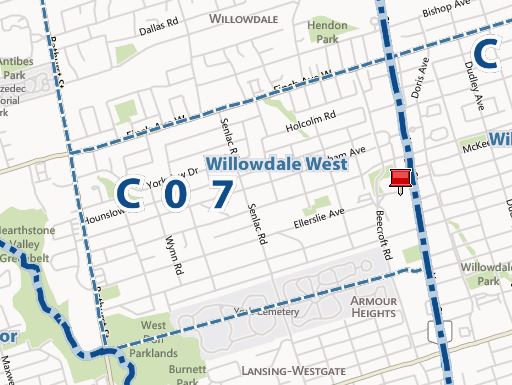 Willowdale is an established, affluent community in the city of Toronto, Ontario, Canada, located in the district of North York. It was originally made up from three postal villages, namely Newtonbrook, Willowdale and Lansing.

The Willowdale neighbourhood consists of single-family homes, condominium townhouses and high-rise condominium towers. High density development is restricted along Yonge Street. The single-family homes range in age from the original 1910 to 1950s construction (one- and two-storey pre-war houses and modest one-and-a-half-storey postwar houses). After the 1990s, very large replacement two-storey luxury homes were constructed by tearing down the original houses. It is in this neighbourhood that the term "monster homes" was first applied by Torontonians.

Willowdale has come a long way since its days as a rural hamlet known as Lansing in the 1800s. When Mel Lastman held office in North York, he lobbied endlessly to get the city centre built and the Sheppard subway line dug. His success led to a commercial and residential development boom in the one-time suburban enclave. The uptown area (with downtown prices) has the amenities of a bona fide city centre plus easy highway and transit access (though rush hour congestion is becoming increasingly aggravating for residents). There are blocks of dated apartment buildings along Bathurst, Sheppard and Finch, but most residences are immaculately kept detached houses. A dozen smaller parks and parkettes offer a break from the intense high-rise development along Yonge (there are close to 10 new condos in the works between Finch Avenue and the 401).

Gibson House
One of the city’s oldest homes, the Georgian building was completed in 1851 and lies, literally, in the shadows of some of the newest. Take a tour conducted by guides in period costume or enjoy the surrounding greenery. 5172 Yonge St., 416-395-7432.

Mel Lastman Square
Mel’s namesake includes a pond that doubles as a skating rink in winter, a summer farmers’ market, an outdoor amphitheatre that hosts plenty of free shows and access to the six-storey North York Central Library. 5100 Yonge St., 416-395-7582.