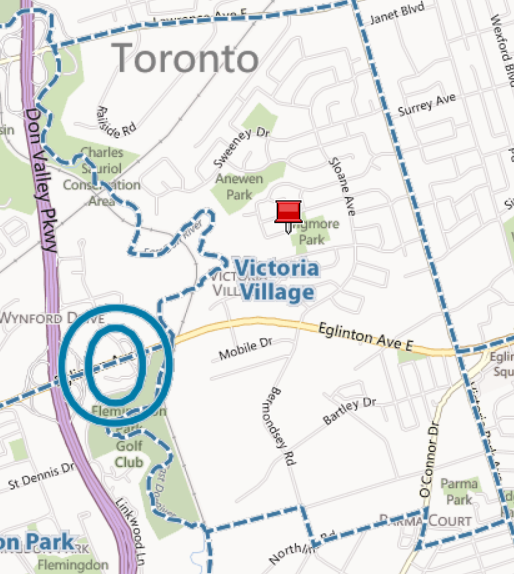 Victoria Village is a neighbourhood in the city of Toronto, Ontario, bounded on the west by the Don Valley, on the north by Lawrence Avenue East, on the east by Victoria Park Avenue, and on the south by Eglinton Avenue East, although there is a small area south of Eglinton to Sunrise Avenue that is sometimes included. It is located in the southeast of the North York district. Its population is diverse in ancestral backgrounds with a larger proportion of South Americans than most of the city.

Housing Stock: The neighbourhood has many high- and low-rise buildings, which provide affordable living and are located on the edges of the neighbourhood, with mostly bungalows, some semi-detached homes, and some two-storey detached (either rebuilt bungalows, or built after the initial period of construction, which occurred mostly from the late 1950s-1960s). Because the neighbourhood borders the Don River some of the homes have stunning views overlooking the Don Valley. A significant portion of the single detached homes in the area abut valley areas, notably the Charlesch Sauriol Conservation Reserve.

Most of the houses built in the area are bungalows. The apartments and condos are mostly located on the borders of the area, Lawrence, Eglinton and Victoria Park Avenues.