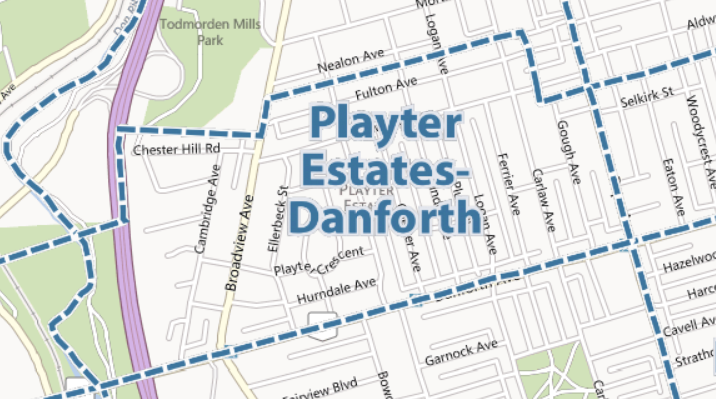 Playter Estates is an area in the east end of Toronto, Canada bounded by Jackman Avenue to the east, the Don River Valley to the west, Danforth Avenue in the south, and Fulton Avenue in the north. The neighbourhood is built on land once owned by the Playter family for whom two streets in the area are named. The old farmhouse of the Playter household at 28 Playter Crescent is now the Playter Mansion, which is often used for various films, television shows, and commercials.

The neighbourhood is historically Greek, but is increasingly popular among artists and business professionals. The advent of Taste of the Danforth, a weekend long celebration of Danforth Avenue cuisine and culture, has made the area far more popular in recent years.

Although the increasing home prices in the community cater to the upper-middle class, the neighbourhood still tends to lean to the left of the political spectrum, mainly supporting New Democratic Party candidates in provincial and federal elections. The area is also home to comedian and CBC series host

George Henry Playter was born around 1736 in Surrey and died around 1820-1822 in what is now Toronto. He emigrated from England to Pennsylvania, where he married Elizabeth Welding. During the American Revolution, he seized military documents for the British and was granted a commission as a Loyalist captain. He moved with his family first to Nova Scotia, then Kingston in 1783, then finally to Toronto in 1793, where Lieutenant Governor Simcoe, to whom he may have been related by marriage, granted him 2000 acres (8 km²) of land in York Township. He built a house, Drumsnab, on what is now Drumsnab Road near about Castle Frank.

According to his son Ely's diary, George was captured at Drumsnab in 1813 by American troops looking for munitions, provincial archives and militia officers, but was quickly released. George had at least three daughters (Elizabeth, Sarah, Mary) and five sons (John, James, Ely, Watson and George), and is remembered today mainly as the progenitor of the family that gave its name to the Playter Estates neighbourhood.

Ely was an MPP. His son John married Sarah Ellerbeck, for whom Ellerbeck Street is named. John's grandson John Lea Playter built the farmhouse at 28 Playter Crescent, the lands surrounding which were subdivided by 1912 to form the Playter Estates. Jackman Avenue is named for John Lea Playter's wife Mary Jackman. George Playter Jr. ran the first stage coach line between Newmarket and York along Yonge Street.

This exclusive district east of the Don and north of the Danforth takes its name from the Playter family, Loyalists who settled the area in the 1790s. It’s the kind of close-knit, front-porch community where cats slink safely across the road (thanks to the one-way streets and speed bumps). Young families clamouring for houses within the catchment area of Jackman Avenue Public School (it’s well-known for high test scores) are commonly caught in bidding wars.

HOUSING STOCK: The largest and most beautiful homes surround the old Playter family mansion currently being overhauled on Playter Crescent, and can easily reach $2 million. Smaller houses, such as a two-storey gabled semi with a porch, might start at $650,000. The streets west of Broadview feature a mix of small Ontario cottages, smart 1940s brick homes and modern infill houses.

BARGAIN ZONES: Prices are lower the closer you get to Pape. House hunters with fast buying reflexes can also snag fixer-uppers west of Broadview or east of Chester.

THE VERDICT: Comparisons to both Rosedale and Riverdale abound. And as long as Jackman Avenue Public School keeps those test scores up, the neighbourhood will continue to draw professionals with young children.

Blackstone This premium butcher deals in organic cuts so beautiful, it almost feels wrong to barbecue them. Home deliveries are via vintage bicycle. 207 Danforth Ave., 416-463-3100

Nearby Restaurants
Globe Bistro
The Académie française would be appalled at the liberties being taken with the term "bistro" ... (0.35 km away)

The Willow Tex Mex Bar and Grill
Tex-Mex staples are the signature of this slightly shabby restaurant and bar. Fajitas, tacos and ... (0.35 km away)

Mambo Lounge
The focus of this Spanish-Cuban tapas restaurant is the sexy, dark oak bar, backed by ... (0.36 km away)

Asteria
The westernmost souvlaki house on the Danforth is also one of the most down-to-earth. Takeout ... (0.37 km away)

The Old Nick
This casual neighbourhood bar and restaurant offers the usual burgers, wings and wraps, plus a ... (0.38 km away)

Seven Numbers
As one of the only Italian options along the Hellenic Danforth, this loud, festive trattoria ... (0.39 km away)

Embrujo Flamenco
Though it calls itself a tapas restaurant, the portions are more like tapas’ larger cousin, ... (0.40 km away)

Nearby Shopping and Services
Dash Kitchen
This cheery little shop is designed for running in and picking up a homespun meal. ... (0.34 km away)

Simryn Chocolates
Simryn’s owner, Noni Fenby, is squeezing a new refrigerator into her Lilliputian store. And she’ll ... (0.35 km away)

The Big Carrot
Three years after an expansive renovation, the market is still a destination for ethical eaters. ... (0.43 km away)