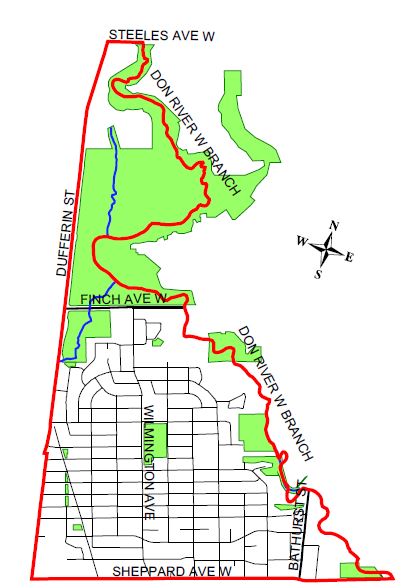 Bathurst Manor is a neighbourhood located in the North York district of Toronto, Ontario, Canada. It sits on a plateau bounded on the north by Finch Avenue West, on the west by Dufferin Street, on the east by the Don River (west branch), and on the south by Sheppard Avenue West. The area is also regarded as part of the Downsview postal area as designated by Canada Post. It is part of the former City of North York, which merged with five other municipalities and a regional government to form the new "City of Toronto" in 1998. It is part of federal and provincial electoral district York Centre, and Toronto electoral ward 10: York Centre (East).

Bathurst Manor is one of several heavily Jewish-populated neighbourhoods on Bathurst Street. It is a suburban community of Ranch-style house, bungalows, side-split single-family homes and multi-family triplexes built in the late 1950s to early 1960s. While most of the population was originally Jewish, and several synagogue congregations are located in the neighbourhood, there are also significant Italian, Russian and Filipino populations.

The community is home to the Canadian headquarters of B'nai Brith at 15 Hove St, the Bathurst Jewish Community Centre (BJCC), the Lipa Green Building at 4588 Bathurst St is for Jewish Community Services. The Royal Canadian Legion Branch Wilson 527 at 948 Sheppard Ave. W.

In 1996, the Toronto Transit Commission extended subway service to the area with the opening of the Downsview Station, at Allen Road and Sheppard Avenue, allowing a thirty-minute train ride to Union Station at the southern cusp of downtown Toronto.

This quiet North York neighbourhood used to be a well-kept secret. Homeowners loved the generous lots and quiet, leafy-green streets, and snapped up post-war bungalows at bargain prices. However, in recent years Bathurst Manor has achieved up-and-comer status, and while bungalows used to hover around $350,000, they now go for an average of around $700,000. There’s a heavy Jewish population with a hodgepodge of Italian, Russian, Polish and Filipino families mixed in. Area landmarks include synagogues, strip malls and the sprawling 338-acre G. Ross Lord Park. Canadian author Stuart Ross’s 2011 novel Snowball, Dragonfly, Jew is set in the area and references many of the streets and stores in the Sheppard and Bathurst Manor plazas.