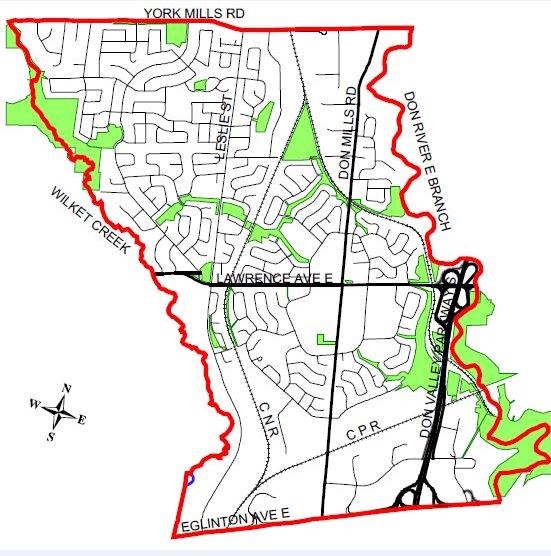 Banbury-Don Mills is a mixed-use neighbourhood in the North York district of Toronto, Canada. It was developed to be a self-supporting "new town" and was at the time located outside of Toronto proper. It is bounded by York Mills Road to the north, Eglinton Ave to the south, Wilket Creek to the west, and the Don River E Ranch to the east.


The local high school is the Don Mills Collegiate Institute, which opened in 1959. In 2003, the parkette at the corner of Don Mills and Lawrence was renamed the Macklin Hancock Parkette. An area elementary public school is Norman Ingram Memorial School, located on Duncairn Rd.

Parks includes Bond Park which has sports fields and an arena, and Moccasin Trail Park where a remote, undeveloped section of ravine can be reached by a pedestrian tunnel under the Don Valley Parkway.

At Wynford Drive and the Don Valley Parkway, a new $300 million cultural project is being constructed on 6.8 hectares (17 acres). The Ismaili Centre, the Aga Khan Museum and a public park,will provide an exhibition space for Islamic art and history and will provide a centre for the Ismaili community in Canada.The project, whose foundation was laid on May 28, 2010 by Prime Minister Stephen Harper and His Highness the Aga Khan, is designed by award-winning architects: India-based Charles Correa, Japanese architect Fumihiko Maki, Lebanese landscape architect Vladimir Djurovic and the Toronto-based Moriyama & Teshima Architects.

Don Mills feels as comfortable and safe as a favourite cardigan. To stroll its winding streets, still replete with post-war housing of the ’50s and ’60s, is to enter a time warp. Modernist architectural flourishes of the day still dominate: steeply peaked roofs, multi-dimensional façades, sleek carports. The neighbourhood features an immense variety of housing styles and, perhaps more importantly, the acknowledgement of the natural landscape in home construction—mature trees abound and glimpses of the surrounding ravines are common. In the north, some of Banbury’s homes even seem part and parcel of the scenery. The majority of the area remains pedestrian- and bike-friendly, and the troubled Sheppard subway line, opened in 2002, provides long-needed (if still underutilized) TTC access. A hotly debated extension of the line is currently in the works. The Don Mills Shopping Centre, which has long been a kind of town square, reopened in April 2009 as the upscale Shops at Don Mills. An entirely different kind of development, the seven-acre Aga Khan’s new $300-million Ismaili Muslim community cultural centre began construction at Eglinton and Don Mills in 2012 and is scheduled to open in May 2013.